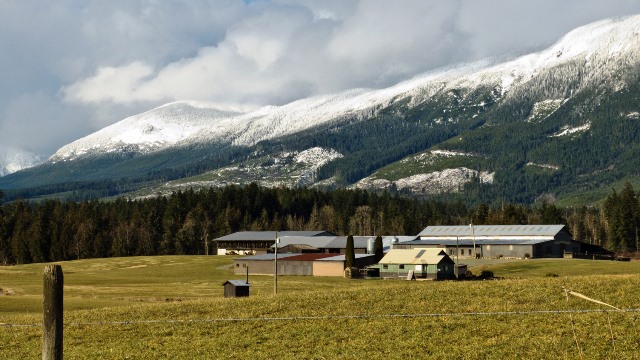 Vancouver Island lies on the west coast of North America. It straddles the 49th parallel, the line that divides much of the United States and Canada.

The Alberni Valley is one of the largest drainages on Vancouver Island and it is very fertile. Once there were vast forests of enormous size, abundant fish, clams, herbs & tubers that once supported two tribes of indigenous people: the Hupacasath and the Tseshaht.

The mountains that surround the valley rise from sea level to 2,020 meters, well above the treeline which is at about 1600. The ecosystems, or life zones go from Alpine mountaintops, through montane forests of Amabilis Fir, Mountain Hemlock, and Yellow Cedar to highly productive lowland forests of Douglas Fir, Hemlock and Cedar.

Of a 1,437 km,2 valley, there are only, 31.7 km2 in the Agricultural Land Reserve; and of that, 60% is actually farmed. This land is found in the lowest reaches of the valley below Great Central and Sproat lake. A further 100 ha is residential or industrial, 400 km²is privately owned forest land, and the rest is Crown Land in in Forest Reserves.

There are around 25,000 inhabitants in the Alberni Valley including 7,000 from two First Nations, theTseshaht and the Hupacsath.

There are plenty more facts and issues about the Alberni Valley to discuss. So I’ll leave it there for mow.